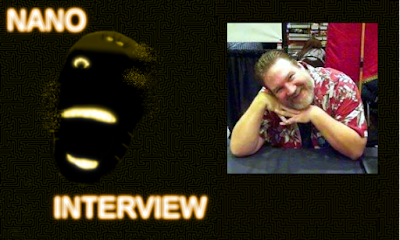 DD: Thanks for plugging in, Greg! You're known for writing both comedy and horror. What have you been working on recently?

As far as what’s been keeping me busy lately, oh boy howdy, quite a bit. My personal policy is to not talk about projects in detail until they’re launched (because over a few decades I’ve learned plans sometimes change) but I will say the new novel is almost done. It’s a musical, which is really hard to do in book form. I’m eager about a nationwide gig dealing with my comedy past that looks like it might happen this summer. We’re just negotiating on whether I have to wear pants or not. And I’m working on the DEVIL MONKEY script. But I’m always working on the DEVIL MONKEY script. Because I can’t let it go. It’s so beautiful.

DD: Tell us your thoughts on humor's place in horror.

GH: I definitely believe the two go hand in hand. A burst of laughter isn’t too different from a scream. All my favorite movies and writers combine both. It doesn’t have to be campy humor, although that’s fun. It can be clever dialogue between characters. I know writers who go out of their way to remove humor from a horror story, but I think it’s lying to your audience. People are naturally funny. Life is funny. Take humor away and it’s not a realistic character or story.

DD: We collaborated on an audio serial, DRACULA'S WINKEE, which you adapted from your story of the same name. What's the history behind it all?

GH: It’s all cold, shriveled winkees and carnivorous vulvasaurs, baby! That damn project has been alive almost as long as Drac! It started as a serial on an old horror website I ran back in the day. Then it turned into a bunch of short stories and a TV series (one of those plans that changed) and wound up as the audio serial. It’s one of the most giddy, stupid things I’ve ever written and it just keeps growing. I’ve been asked to write it as a book for years now but haven’t gotten around to it. To be honest, all the success is due to the amazing talent I had play Dracula—some Ryan Gosling twin named The Dunwoody.

DD: Do dreams ever influence your work?

GH: Oh yeah. I dream something weird and I try to grab it as soon as I wake up. Might only be a visual or piece of dialogue, but definitely. Actually, I do this half-awake deal when I’m stuck writing a story. I’ll concentrate on the road block and run it over and over when I fall asleep. Doesn’t always work but sometimes when I start waking up, the story will unfold for me while I’m still in a fog. I also mix a lot of Ovaltine and Zima so that might be the key.

DD: On the zombie front - is there anything you'd like to see more (or less) of in the genre?

GH: That’s tough. Every other horror movie or TV show is zombies. I think you either have to go one of two ways. Be Joe McKinney and write so damn fantastic that a ‘regular’ zombie storyline is riveting. If Joe wrote a grocery list, I’d buy it. Or you can do what you did, Dave, with EMPIRE. Dig to find any new idea left and go for it. Your novel is still one of my favorites, not just as far as zombies but in horror overall. Genius twists and so original in an otherwise tired genre. Would be nice if we saw more zombies on trampolines.

Thanks for inviting me to your nunu-hiney interview thingy, man. Let’s do more together soon!
Posted by Dave Dunwoody at 9:56 AM 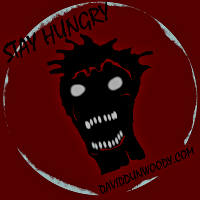